It is currently recognised more and more that technology is, at least in part, contributing to radical changes in modern society. These changes make our daily lives more complex, which should be interpreted differently than the colloquial meaning of the word. Complexity means that interactions become more intensive and wider, and that cause and effect increasingly takes place at a global scale. 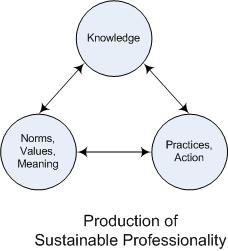 Condast is deeply aware of these developments, and the role technology plays. In fact, I defended my thesis on these exact issues.
Condast's vision on an ethics of technology is based on the notion of an evolutionary development of increasing interconnectedness, that transcends disciplinary boundaries. In an increasing Mode 2 knowledge production system that science is becoming, no-one can claim exclusive knowledge and an overall picture of our state of being. Rather knowledge is taken up in a production cycle that interacts with practices (professionals) and norms, values and meaning, which were traditionally typically themes for the humanities and philosophy. The resulting interaction pattern is called, for lack of a better word, sustainable professionality, and has consequences for organisations, professionals and others who want to go beyond profit maximaisation and efficiency, but rather aim to contribute to a better world (as inspired by the book Re-Thinking Science).

As complexity goes, there are no simple solutions and solid one-liners, but Condast can be partner in showing how a combination of scientific knowledge, philosophical reflection and deeply pragmatic, hands-on practical experience together can shape a robust organisation.